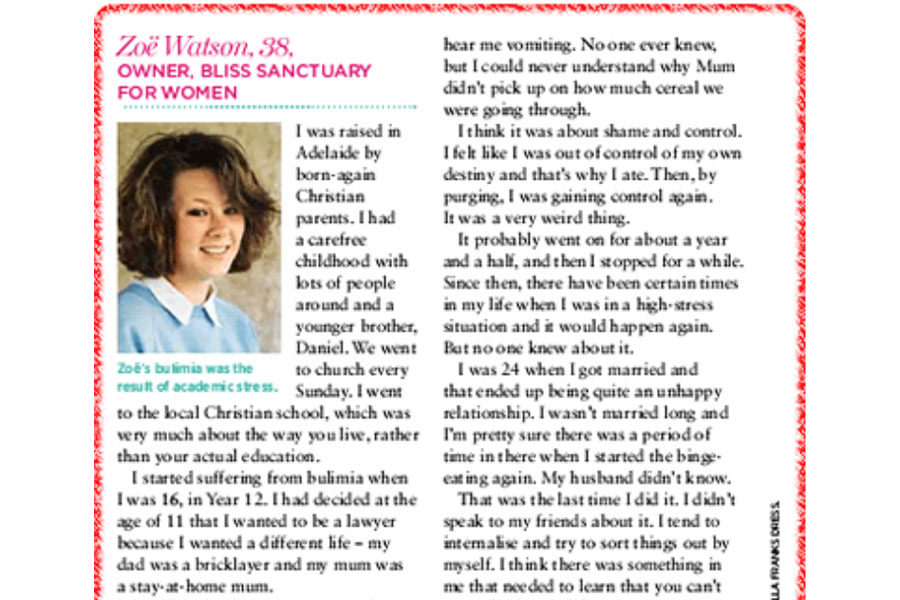 I was raised in Adelaide by born-again Christian parents.  I had a carefree childhood with lots of people around and a younger brother, Daniel.  We went to church every Sunday.  I went to the local Christian school, which was very much about the way you live, rather than your actual education.

I started suffering from bulimia when I was 16, in Year 12.  I had decided at the age of 11 that I wanted to be a lawyer because I wanted a different life – my dad was a bricklayer and my mum was a stay-at-home mum.

But the school I sent to wasn’t that fantastic.  I’d gone up a year already and I was very bright and always wanting to get on to the next thing.  But I think that was challenging for some of the teachers.  I was really frustrated and put myself under a lot of pressure studying.

The bulimia wasn’t connected to how I looked.  I was quite a tall, thin, nice looking teenager.  It was very much stress-related.  I would be up late studying and then I would binge-eat when everyone else was in bed.  Food was very controlled in my home.  We weren’t allowed to just go to the fridge and get something.  And I think since I was a child I’ve associated control with food.

I was quite rebellious and it felt naughty opening up the cupboard and getting something when people didn’t know.  I would binge eat one to two big bowls of cereal and then, straightway, I’d just throw it up.  I think it was all the angst and seeking comfort and then feeling so guilty about what I had just done and not wanting it in my body.  I had to get rid of it.

I’d have a shower at night and often purge in the shower, which is gross, I know.  But it was so people couldn’t hear me vomiting. No one ever knew, but I could never understand why Mum didn’t pick up on how much cereal we were going through.

I think it was about shame and control.  I felt like I was out of control of my own destiny and that’s why I ate.  Then, by purging, I was gaining control again.  It was a very weird thing.

It probably went on for about a year and a half and then I stopped for a while.  Since then, there have been certain times in my life when I was in a high stress situation and it would happen again.  But no one knew about it.

I was 24 when I got married and that ended up being quite an unhappy relationship.  I wasn’t married long and I’m pretty sure there was a period of time in there when I started the binge-eating again.  My husband didn’t know.

The was the last time I did it.  I didn’t speak to my friends about it.  I tend to internalise and try to sort things out by myself.  I think there was something in me that needed to learn that you can’t control things in life and you need to go with the flow.

Definitely the bulimia has had a long lasting physical effects.  I’ve got irritable bowel syndrome and bad sinuses.  My body doesn’t regenerate quickly and I suffer from crippling migraines.  At a period where my body was growing, I treated it really badly and now my digestion is terrible and I’m sure that’s got to be from the eating and purging.

I don’t think I would become bulimic again.  I’ve really put a lot of time and energy into understanding the background behind it.  Today, it feels like I’m talking about someone else, not me.

I think my parents will be very surprised when they read this but I have to be honest.  That’s what my life is abou